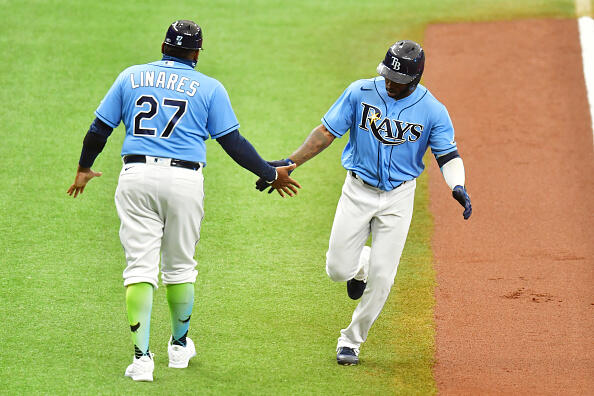 Randy Arozarena hit a pair of solo home runs to help the Tampa Bay Rays force extra innings, and after Miami broke the tie in the top of the tenth inning, Brandon Lowe, mired in a 2 for 34 slump, hit a sacrifice fly that scored Brett Phillips to give the Rays a 5-4 win Sunday at Tropicana Field.

Miami jumped out early on Rays starter Tyler Glasnow, who revealed after the game he was dealing with symptoms of a migraine headache, as Corey Dickerson walked to start the game, and Starling Marte took a 1-1 curveball and sent it over the fence in straightaway center for his fourth home run of the season.

But Trevor Rogers could not get the shutdown inning in the bottom of the first, as Arozarena took a 95 MPH fastball and sent it into the seats in right for his second home run of the season

Miami got their insurance run back in the third against Glasnow, as Dickerson led off the frame with a triple and scored two batters later on a base hit by Jesus Aguilar.

The Rays got back to within a run in the fifth as Hunter Renfroe, who nearly homered in his first at bat of the night, took Rogers to the opposite field for his sixth home run of the year.

Arozarena tied the game up an inning later with his second holo homer of the day and third of the season.

The game remained 3-3 going into extra innings, and Miami took the lead when Matt Joyce's two-out single brought in Lewis Brinson, who was placed at second base to start the frame.

The Rays immediately rallied back in the bottom of the inning, as Ji-Man Choi doubled in Joey Wendle to tie the game, and after Michael Perez lifted a fly ball that moved pinch-runner Brett Phillips to third base, pinch-hitter Kevin Kiermaier then drew a walk and Brandon Lowe, mired in a 2 for 34 slump, lifted a sacrifice fly that plated Phillips to win the game.

The win improves Tampa Bay to 28-13 on the year, and the Rays remain 5.5 games ahead of Toronto in first place in the American League East.

The Rays next travel to Washington to begin a two-game series with the Nationals. First pitch is scheduled for 6:05, with coverage on WDAE beginning at 5:00 with The Inside Pitch.

About Home Of The Rays