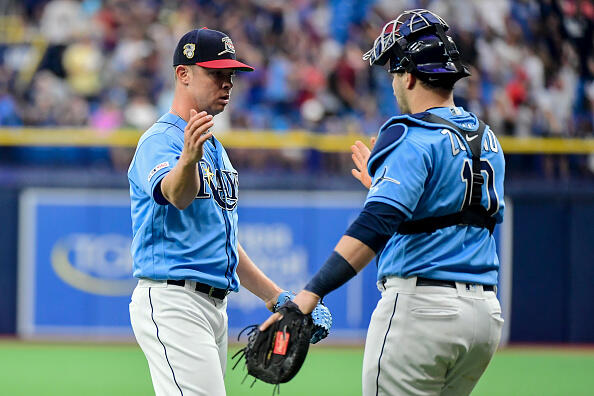 ST. PETERSBURG (WDAE) -- Just days before the start of Spring Training, the Tampa Bay Rays have made another deal using their strength.

The Rays have agreed to trade reliever Emilio Pagan to the San Diego Padres in exchange for outfielder Manuel Margot and minor-league catcher/outfielder Logan Driscoll. The deal was first reported by Josh Tolentino of The Athletic.

Despite starting 2019 in Triple-A, Pagan solidified the back end of bullpen when Jose Alvarado and Diego Castillo faltered. In 66 appearances at the big league level, Pagan went 4-2 with a 2.31 earned run average and 20 saves in 28 opportunities.

The 28-year-old pitcher is the second major piece of the 2019 Rays team that won 96 games dealt to San Diego, joining outfielder Tommy Pham, who was traded in December for outfielder Hunter Renfroe and minor-league infielder Xavier Edwards.

The 22-year-old Driscoll, taken in the second round of the 2019 draft out of George Mason, spent his first year as a professional at Tri-Coty of the Northwest League, hitting .268/.340/.458 with three hme runs and 20 RBI in 39 games. He also played six games for Peoria in the Arizona Fall League, going 6 for 19 with a pair of homers and three RBI.

The Rays released the following about the trade:

Margot ranked second among NL center fielders with a .992 fielding pct., trailing Gold Glove winner Lorenzo Cain (.994) of the Milwaukee Brewers. According to StatCast, he ranked seventh among major league outfielders and fourth among NL outfielders with 11 Outs Above Average, which is the cumulative effect of all individual catch probability plays with which a fielder was credited or debited. In addition, he ranked fourth in the majors and second in the NL in StatCast’s metric measuring best outfielder “jumps” at 1.6 feet above average.

About Home Of The Rays